By Josh Karliner, Director of Global Projects and International Team Coordinator for Health Care Without Harm.

Every year, the world’s Ministers of Health gather in Geneva to address the most pressing issues related to the physical and social wellbeing of human kind. Debates on infectious disease like the Zika virus, non-communicable diseases, and access to health care usually top the agenda. This year however, climate change — widely considered to be the greatest health threat of the century — broke through in a big way. 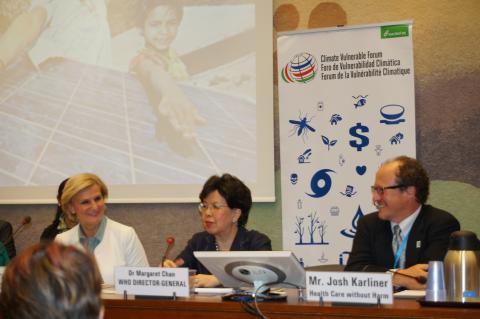 Almost six months after she helped broker a unanimous agreement among 195 governments in Paris, Christiana Figueres, head of the United Nations Framework Convention on Climate Change, came to the World Health Assembly (WHA) to urge ministers of health to prioritize climate change. Figueres eloquently argued that “working on climate change is [our] best prevention strategy” and that ministers need to use “the health microphone…[to] translate what climate change actually means for real people.”

Listening to Figueres’ speak, it struck me how far we’ve come. Just a few years ago, Health Care Without Harm was one of a small number of voices in the wilderness advocating on climate and health. As one WHO colleague put it, “you could fit the number of people working on the issue into a phone booth.”

Today, dozens of governments large and small, along with several major institutions ranging from the World Bank, to the WHO, UNDP, to a growing number of national health professional alliances are all setting their sights on climate and health. Health has become increasingly central to our understanding climate change. And the health sector is ever more prominent in marshaling the forces to adapt to and reverse its deadly trends.